First, a bit of information for you. In September 2018, the indoor game adopted the World Bowls Laws of the Sport (currently Crystal Mark v3.1). The same Laws now apply to both indoor and outdoor bowls. So the answers to these and previous questions apply to indoor as well as outdoor games. As has always been the case, there are some areas where the Controlling Body is able to stipulate certain conditions, so check the regulations for the competition.

How many bowls can you use during trial ends?

What is the difference between a dead end and a tied end? What is recorded on the scorecard?

A dead end occurs when the jack has been moved outside the rink side boundaries or the end has been declared dead by players in singles, the skips or the umpire. It is not counted as a completed end, even if all the bowls required have been played.

Take a look at the scorecard.

End 5 was a tied end, and no score is recorded for either player on that end. The total score from the previous end, end 4, is carried forward to end 5.

Now let’s say that end 7 was declared dead. As far as the game and the scorecard are concerned, it never existed. Nothing is entered on the scorecard and the end is replayed. The scorecard shows the result for the replayed end. 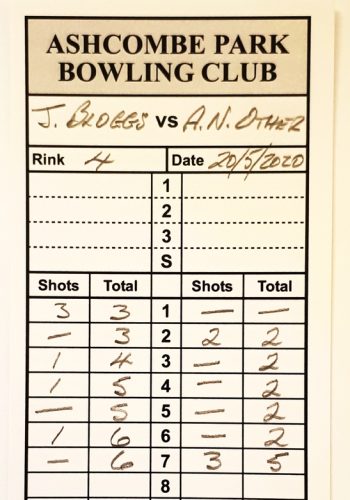 We use cookies to ensure that we give you the best experience on our website. If you continue to use this site we will assume that you are agreeing to their use.AgreeCookie policy